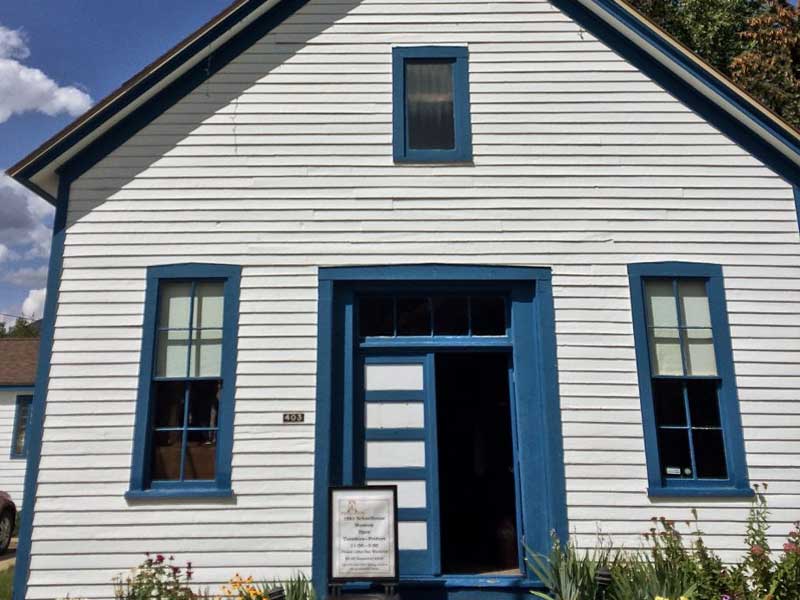 Communities across America had one room school houses in the late 19th century — over 100,000 in 1900. Today, only 400 still stand. Built in 1883, this frame school house, with original belfry and bell, was built by the town for the children of Dillon’s first families. Trains made the mining towns more desirable for families to live in Summit County.

The railroad, which arrived in Dillon prior to the school’s construction, brought “modern” materials such as four-by-four casement windows and pressed tin for the ceiling. A platform in front with curtain enhanced recitations and presentations given by the students. Families came and a new, larger school was built. From 1910 -1966, the framed building was used as Sunday School and a mission church and then by the Dillon Community Church.

It was the Ladies of Dillon who were the driving force in using and preserving the building. They guided the moving of the famed building and its 20th century addition when the Dillon Dam was built and the historic buildings were moved or destroyed to ensure water purity in Denver’s new water supply – Lake Dillon. The school house became a museum in 1972.

The school room looks as it might have in 1892. Artifacts include McGuffy desks, Heath readers with hand-crocheted bookmarks, slates and chalk, individual learning stations, and an 1885 piano. Other artifacts on display include a Centennial flag, black celestial globe, kerosene slide projector with glass slides, and sand table. To reflect Dillon’s commercial life, a general store and blacksmith room adjacent to the schoolroom, displays blacksmith tools, assay scales, butcher’s block, post office boxes and coffee grinder.

Directions: You will find the school house Museum at 403 LaBonte Street in Dillon.